This is not just an album review, but also a personal story about my introduction to the music of Crescent Moon. A band I never heard of, which isn’t odd at all, because they just released their debut album The Lidless Room only half a year ago (December 2015). And I know, this is a debut album that will stay with me forever.

Let’s start with the personal story first. As you may know, I try to stay as ‘updated’ as possible in the progressive rock world. I listen to a lot of (prog rock related) radio stations/shows, and try to follow the latest news. Around January, I found more and more news about a ‘new’ Dutch band named Crescent Moon. First, I was like “Yeah, right, another Dutch band, I have plenty of albums to review already.”… But as the month January progressed, my ‘newsfeed’ became more and more filled with news about this band. They topped in (indie) music charts on several internet radio stations, and even good friends of mine messaged me personally and asked me if I already heard some of their music yet. I had to answer with a “No, not yet! I have tons of other albums I need to listen to already, but I will try to make time soon!”… And before I knew I became friends with Eric Peters, the bassist of Crescent Moon (who’s also responsible for the engineering and mastering of the album). We had some lovely conversations in chat rooms of several radio stations, and I thought “What a nice guy! A musician who’s really dedicated to his music and also to his listeners”. Before I even could ask for some music Eric already asked me if I was interested in a copy.

When I got the CD I was quite surprised. The CD is in a DVD sleeve, which you don’t see quite often these days. The track list is also divided in Side 1 and Side 2, which is strange, because it’s a CD (and yes, I almost tried to turn over the CD in the CD player to check if it worked). I also found out that it’s a ‘family band’. Brothers Frank Peters & Eric Peters did most work on the album, and are accompanied by the two sons of Frank on the album who play several instruments. The wonderful artwork is done by Margot Peters, who is the sister of Frank & Eric. When I got my copy I also got a personal letter from Eric along with it, which is very sweet! I also had the honour to interview Frank (who’s also a nice guy!) and Eric on the Dutch beach in April this year, and we mostly talked about the creation of The Lidless Room. It’s one of the longest and most interesting interviews I’ve ever done, so please check it out! You can listen to the interview by clicking here!

Ok, let’s talk about the album now! It’s a concept album, where ‘internet and privacy’ are the key points of the story. Yes, since the rise of social media it’s easier to share (private) information with each other, but you have to be careful which information you share with who (yes, something your roving blabbermouth reporter also has to deal with too, I should be more careful myself). The music itself is something I call ‘refreshing’. Every track is different, although it carries some Pink Floyd/Roger Waters vibe from time to time. My favourite track of the album is actually The Devil And The Machine, a stranger in our midst. It’s the roughest and most energetic track of the album, but very cleverly put together. The Old Riverbed is a track that sounds like it could have been written by J.J. Cale! It’s an album you should listen to in its entirety, but the tracks Black Vinyl Dreams and Of Aphids And Ants are wonderful singles which stand on their own.

Ok, now I have a few points of criticism, and Eric also asked me to be as honest as possible, haha. Too bad that the drums aren’t real, I always prefer real drums over drum programming, but luckily the cymbals you hear on the album are real. The overall picture of the producing/mixing/mastering is good, but a bit too soft in my opinion. Despite the small minor points it’s a brilliant album, and I really recommend to listen to this album and form your own opinion about it. They’re now busy making a second album, and I really can’t wait to hear it!

You can now listen and also purchase their album digitally on Bandcamp, go click on this link: https://crescentmoononline.bandcamp.com/

And that’s not all, they’re also giving away a free copy of their album if you answer the question correctly that’s on the picture below! Just go to their Facebook page by clicking here, and win (and don’t forget to like the page)! 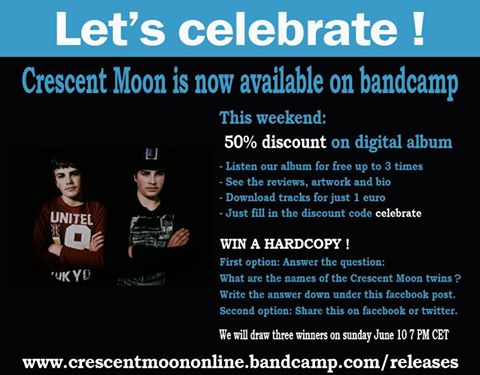 A big hug from your roving reporter!