I’ve never seen both bands live so I was very curious how they would perform. I had the honour to interview Thomas Andersen, the keyboardist of Gazpacho, right before the gig.  He’s a very sweet guy and I had a lovely interview with him (you can listen to the interview here). After the interview I was waiting at the entrance outside and I found out that there were a lot of people waiting to get in, I think that the venue was (almost) sold out eventually. One of the security guards told me I should watch my bag (where I carry my camera and reporter stuff in) carefully because he told me that it was going to be crowded. This is actually fantastic news for both bands that so many people bought tickets to see the bands perform.

Once arrived in the venue I noticed that the stage was full of instruments (guitars, cello, tuba). The drumkit was on the right side (for the audience left side) of the stage, which is very peculiar because you would expect that the drums are always (slightly) in the middle of the stage.

The support band that played before Gazpacho was Russian band Iamthemorning. I don’t know much about this band so I was looking forward to hear their music. The audience gave a big cheer when the band entered the stage. The band is not a standard progressive rock format, because the band consists of a keyboardist/pianist, singer, cellist and violist. 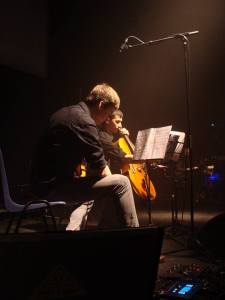 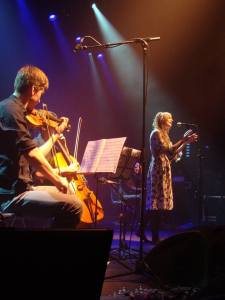 After playing their first song Scotland singer Marjana Semkina thanked the band Gazpacho for making it possible that they could tour with them and hoped that the audience would like the music Iamthemorning is going to play for them. The band plays very dynamic. Marjana makes a lot of gestures with her arms and sings with a lot of emotion in her beautiful voice. Marjana said “thank you” in dutch and she told the audience that it was their first European tour. She also had a book with her where she wrote a couple of sentences in Dutch and she tried to pronounce the sentences the right way. The audience laughed and really loved it that she tried to speak some Dutch and gave her a big cheer.

Before playing the song To Human Misery, Marjana explained to the audience that Russian people drink to misery. She also said that “To Human Misery” is also a quote from The Simpsons TV series, which made the audience laugh again. When Marjana told the audience they were going to play the last track of the evening the audience responded with a great “aaahw” of disappointment. I really enjoyed their performance on stage despite the music is a little bit too soft and sweet for me personally. Still, I would love to see this band again live in the future. 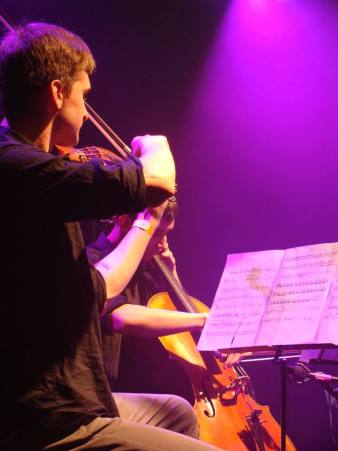 A friend of mine told me that Gazpacho are amazing live, so I was really excited to see the band play live. Before the band entered the stage there was a loud hum-like noise (I don’t know how to describe it properly) that became louder and more sounds blended in. The drummer Lars Erik Asp and bassist Kristian Torp were the first one to arrive on stage. The bass drum was very loud, a bit too loud even, but luckily all the other instruments sounded great. The band started with the track Algorithm, followed by Park Bench (both from their latest album Molok) which is beautiful. The band has brought extra lights and light effects on the stage and there was also a screen projection making their performance extra cool. During the song Choir Of Ancestors there was a woman ‘singing’ along on the screen projection.

The start of the song Defense Mechanism wasn’t flawless. Singer Jan Henrik Ohme couldn’t hear some things good enough because of the loud bass drum. The band started the intro again but still Jan Henrik had problems. He apologized to the audience and the audience gave him a loud applause and cheer. Luckily when they started to play it the third time everything went well. 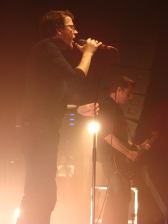 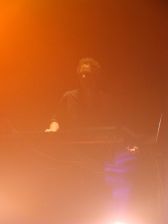 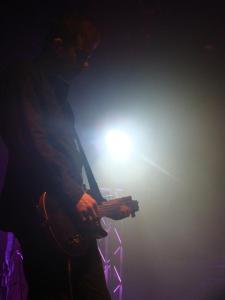 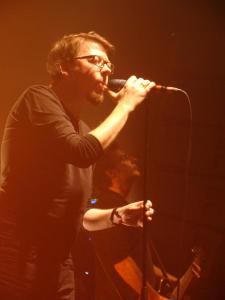 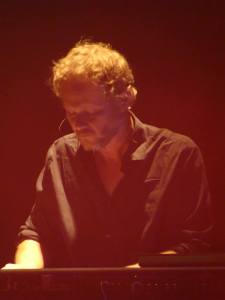 What intrigued me was that Mikael Krømer used a fretted violin. I’ve never seen one before. Mikael isn’t the only one who played special type of instrument. The band had a big surprise for the audience during the song Death Room by switching to completely different instruments! Kristian picked up the big tuba, guitarist Jon Arne Vilbo grabbed an ukulele and Thomas a melodica. The audience loved it, and so did I!

I love the track Chequered Light Buildings during the gig. The setlist said “Chequered Light Billings”, I don’t know if that was a spelling mistake or a funny ‘pun’. I really enjoyed that the band played a lot of songs from different albums. Some bands who play live are too focused on playing a lot of tracks from their most recent album, but Gazpacho is playing songs from 6 different albums. You can see that the band really enjoys to play live and they are really drag the audience into the atmosphere of their music. 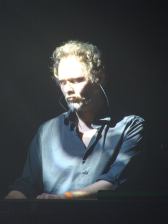 The last track before the encore was Molok Rising. Mikael used his mandolin as some kind of lap guitar during that track. The band slowly went off the stage, leaving us (the audience) in the dark. And now the most heartbreaking moment you will read: I had to miss the encore because I needed to catch my last bus. I still feel bad about the fact that I had to miss the end of the show (while writing this review) because this band is awesome to see live! I really hope they will tour again soon! And this time, I will stay until the end, even if that means I have to walk home.

You can read my concert review on Background Magazine:

All photos made by me.

Me and Thomas after the interview!

The Wizard of Altai Mountains